I won’t go over every story since there are 9, but there are some real gems in this collection of great stories.  Some of my favorites are:

All the stories are good for sure.  Again, not rocket science and not to be delved too deeply in – but great little action short stories.  Again, another great collection of Bond tales and worth the read.  I rate them a solid A-.  Highly recommend.

Next up on my James Bond audio-book while you drive to work kick: Moonraker

This is Ian Fleming’s 3rd bond book – and considered by many to be one of his best.  It really introduces a number of the re-current character traits and story lines of a Bond novel – and it is a good little story to boot.  In the movie version, we saw Hugo Drax bent on destroying the world via taking a chosen population to space and then gassing the entire world’s population as a bid to ‘restart’ the world.  The book version, as usual with Flemming novels, differs from the movie. But as Bond adaptations go – it’s pretty darn close.

In our story, Hugo Drax is a rich and results-oriented industrialist in charge of an important government contract: the Moonraker project.  Moonraker is a new missile designed to protect Britain by making it capable of dropping warheads on enemy targets around it’s sector of the globe.  The post-WW2/pre-cold war themes are thick in this story line and a great insight into the fears of Fleming’s times.  However, Drax and his scientists on the project are a very mysterious lot with very shadowy backgrounds; but are in charge as they are the only people capable of developing such a technological marvel.

The story starts with us introduced to Bond’s gambling prowess at the high-society, high-stakes gambling club Blades at which M is a member.  Drax has been trouncing people at cards and has raised M’s suspicions of cheating.  Bond is sent in to uncover the methods behind Drax’s winning streak and then brutally turns the tables on him.  Fleming’s description of Drax’s character flaws with its near phrenological, and psychological and character ‘analysis’ is down-right entertaining.  You can hear how a person’s fiber was judged in post-war England – which is thick with derogatory national, racial, and appearance-based evaluations.

After the trouncing by Bond, there is the mysterious death of the Moonraker project’s government overseer just days before the very public test launch meant to show the world Britain’s new might.  Bond is brought in to investigate and make sure nothing interferes with a successful, test-firing of the Moonraker rocket.  He then uncovers the sinister background of the scientists and Drax, as well as their diabolical plan.  As the seconds before the Moonraker is test shot, Bond must find a way to stop their plot and save England.

The plot is solid and simple, the villain overblown, the evil plot gigantic, and the story keeps right on going through the minor plot holes and improbabilities.  Drax makes the first of the now-boilerplate great evil-genius monologs.  In short, it’s everything James Bond story is meant to be and I was loving it.

I give this a solid A- since it’s a great, fast and entertaining read.  It introduces us to many of Bond’s character traits and the action he’s well known for.  Highly recommend.

Next up on my listen-while-you-commute: Live and Let Die by Ian Fleming

Live and Let Die is Ian Fleming’s second novel, which came out pretty quickly after Casino Royal.  This story has a very different tone with Bond traveling to America to battle the nefarious black gangster Mr. Big.

The story starts with someone smuggling and selling large quantities of gold coins in Harlem.  The coins are from old Caribbean pirate treasure long thought lost.  M sends Bond to America where he hooks up CIA agent Felix Leiter to find out who is selling the coins.  Their path soon crosses the gigantic Haitian Mr Big who is behind the coins.  He works for SMERSH and uses voodoo to maintain his control over his minions.  During Bond’s first encounter, he meets Mr Big’s captive fortune-telling girlfriend Solitaire.  He escapes, saves Solitaire, and they head to Florida to follow up on a lead to the source of the smuggling route.  The story then gets thick with Felix being attacked by sharks and Bond heading to Jamaica to search out the source and get revenge for Felix as well as rescue the now-captive Solitaire.  Bond swims through shark infested waters to the island source, is captured, and is nearly killed as Mr Big attempts to drag Solitaire and Bond across the reefs.

It’s a great little story, but certainly different than Fleming’s earlier offerings.  Fleming’s impressions of America via Bond’s observations are humorous and derogatory at times.  His comments about American cars, food, and Florida’s aging retirement population are particularly entertaining/harsh.  It is a good insight into how certain American cultural aspects appear to our foreign friends.  There is plenty of racism in Flemming’s writing about Mr. Big’s and his African American gangsters.  Fleming’s 50’s-era sentiments certainly show.

Despite the sexism/racism/dated descriptions (that likely wouldn’t have been given a second thought in Fleming’s day) it’s a pretty entertaining story.  It contains a caricature-like portrait of America but plenty of action and suspense.  Bond’s seduction of Solitaire is also a strong storyline. This book also introduces a recurrent Bond theme of tropical destinations and shark-infested underwater adventures.  The final scene of Bond being tied behind Mr. Big’s boat and dragged through shark infested waters was used almost exactly in the movie version.

In the end, it was a pretty decent story.  Nothing spectacular, but is much like a fun carnival ride.  Lots of sound and action, but not a ton of substance.  I give it a B.  Recommend.

I tried to climb Mt St Helens on Mother’s day last year after graduating from BCEP – but the weather had other plans (winter snowstorm + lightning!) and we had to cancel.  This year it couldn’t have been more opposite.  Temps were predicted to be warm.  No, strike that, downright HOT.  So warm in fact, that there was a wet-slab avalanche danger warning issued for the entire cascade range and they were even taking the unheard of step of offering refunds on climbing permits.  This made me apprehensive, but our excellent climb leaders who’d had a lot of experience with these conditions and St Helens felt our particular route up Monitor Ridge should be very safe.

We started our 2-day adventure on Saturday afternoon from the Cougar Snopark located on the south side of Mt St Helens.  After a couple thousand feet of gain and ~4 miles of sweaty snow hiking with full camping packs, we reached the tree line and set up camp for the night.  It was blindingly sunny the whole time and getting roasted by the sun was a real danger.  I was taking a bath of multi-spectrum SPF 50 every hour and still got plenty of sun.  The heat made for interesting conditions.  The warm air temp kept me sweaty hiking in a T-shirt and shorts; while the snow was soft and made for slower going.  We brought snowshoes to keep from post-holing.  But as the sun went down, the temps started dropping fast.  After finding a beautiful spot to camp at the foot of Monitor ridge above the tree-line, we quickly melted snow for water and had dinner then I hit the sack early.  (I am now in love with the MSR Reactor stove – I’m selling my old stove to buy one of these). 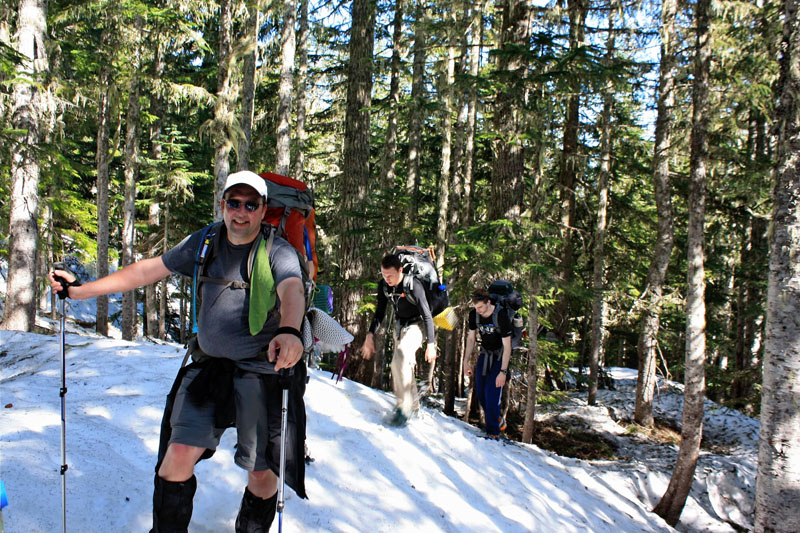 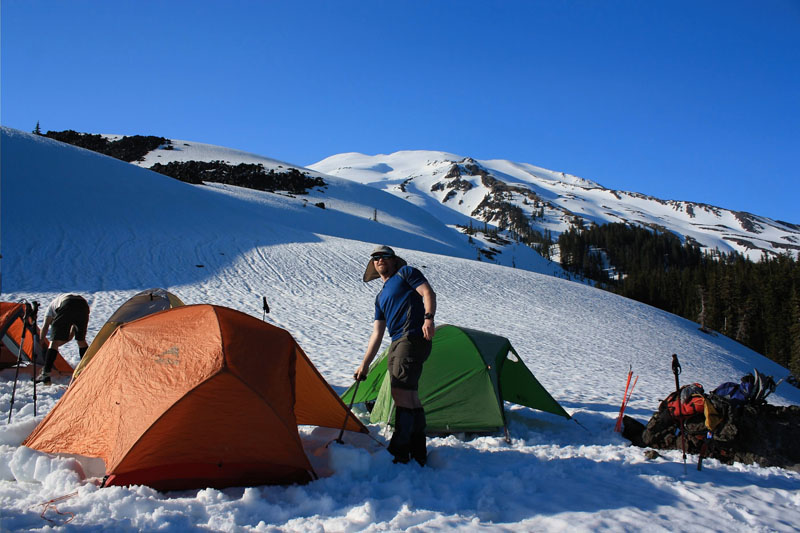 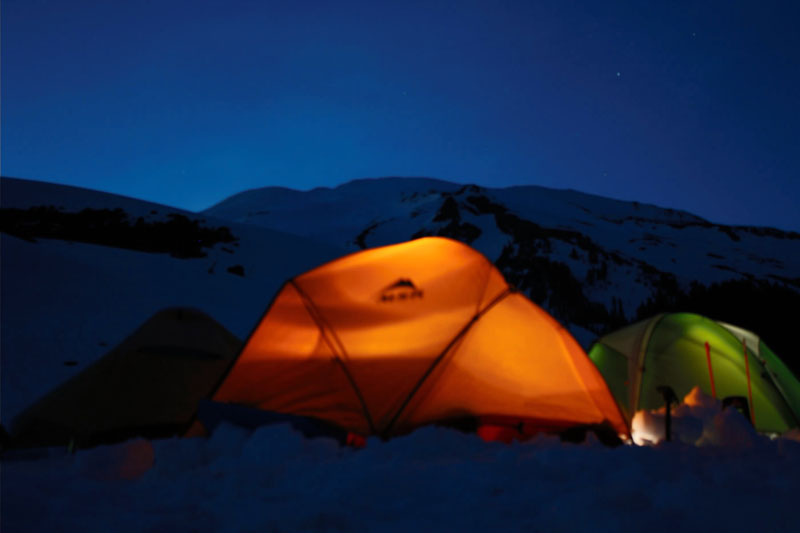 After a few hours of sleep, we awoke at 3:45am to get ready for our climb.  We whipped together our gear, got some food in us, and checked conditions.  The temps were cold but after gathering gear I was shedding layers like crazy.  It was warm – still in the upper 30’s lower 40’s by my guess.  I had hoped for freezing temps since that helps freeze the snow and make for safer climbing – but it was not to be.  A little after 4:30am we switched on our headlamps and started up the Monitor ridge route.  I know the warm temps and high avy danger warnings kept me apprehensive all morning as we started up the steep pitches.  We climbed up, through, and around the rocks of Monitor ridge, taking short breaks every hour for a bite and drinking.  The idea being that by staying on the ridge top and out of the snow fields – we would be much safer.

We made steady progress of about a 1,000 ft of elevation every hour; and the route was only moderately steep.  I would certainly say it was easier than Mt Hood.The sun began to glow over the horizon and we feasted on a beautiful sunrise about half the way up.  The snow was fairly well consolidated, and easy to walk on with crampons.  As we reached to summit, however, the sun was full-on shining and the snow quickly softening.  But by then, we had already reached our goal, the summit rim, at around 9:30am. 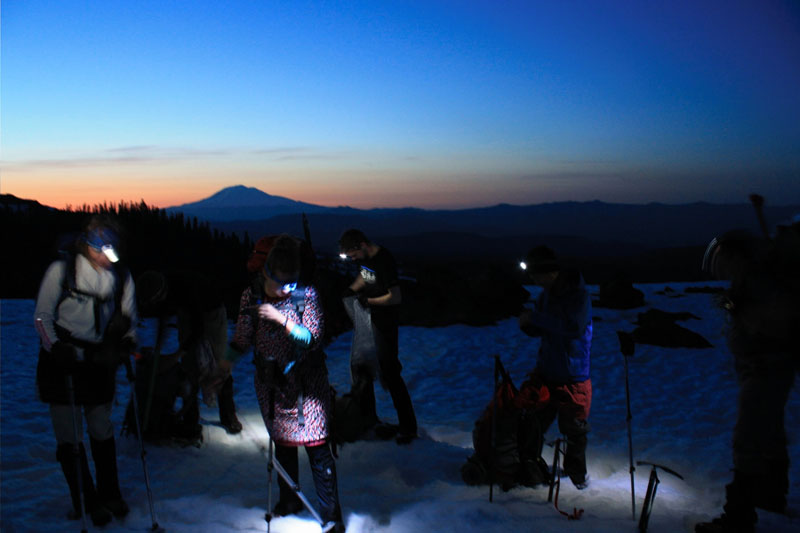 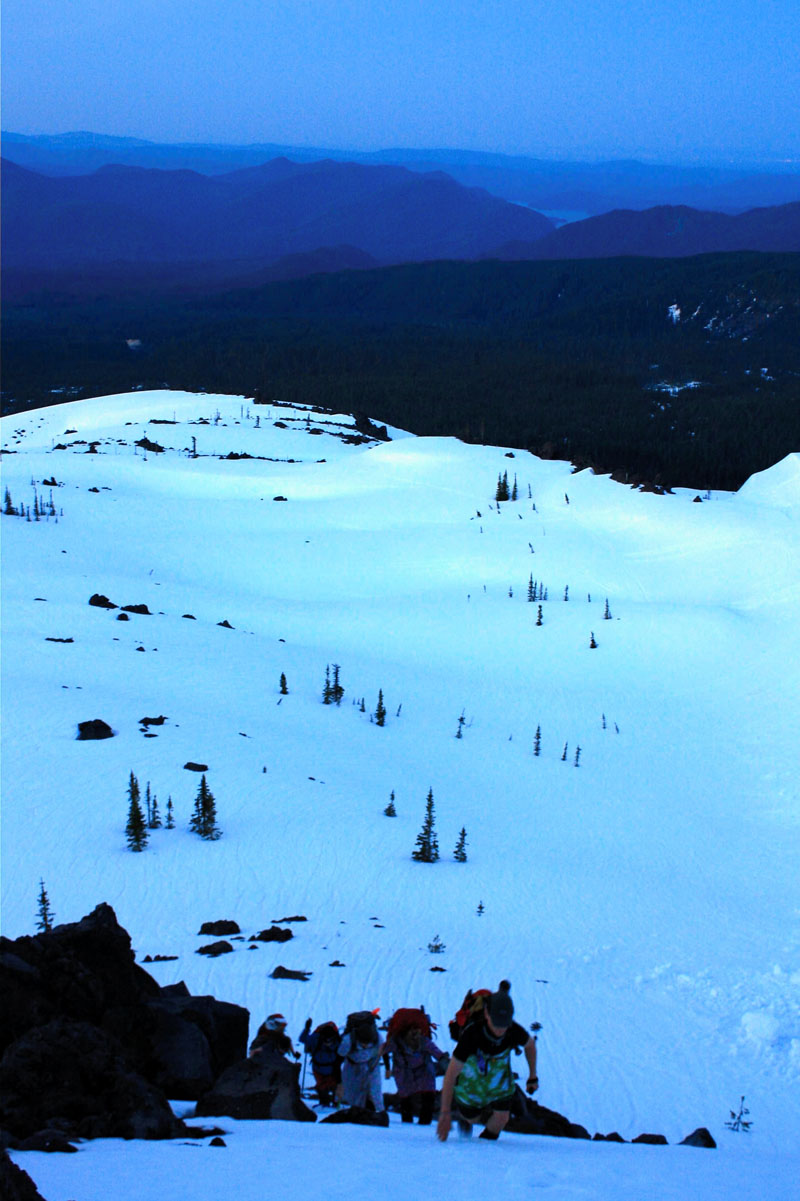 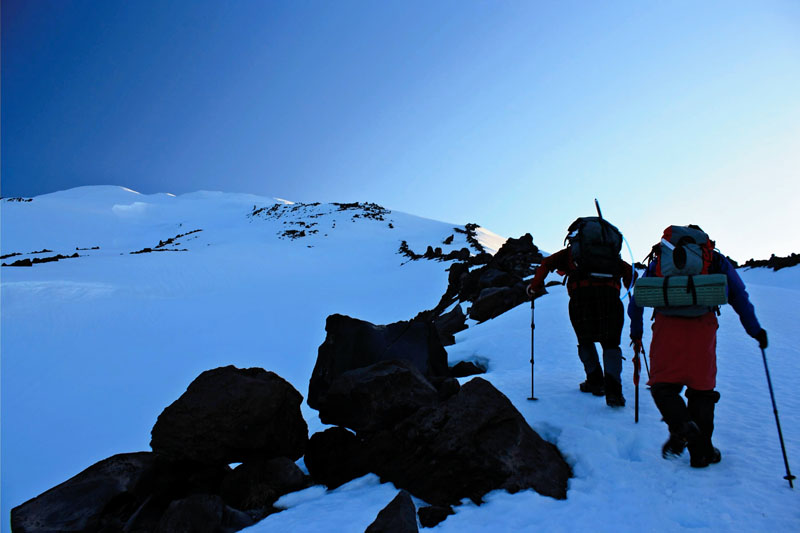 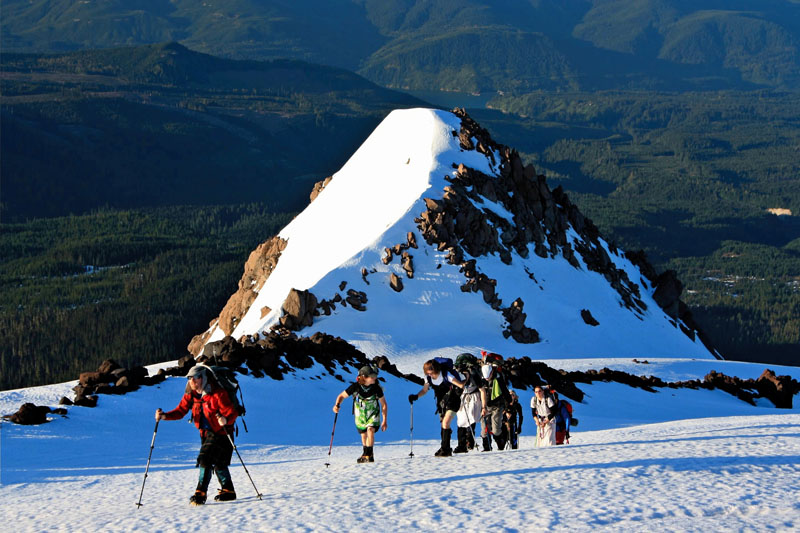 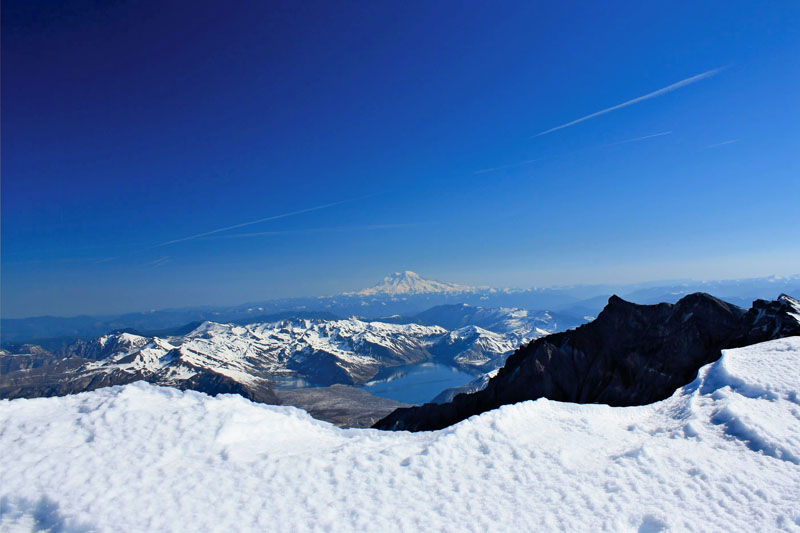 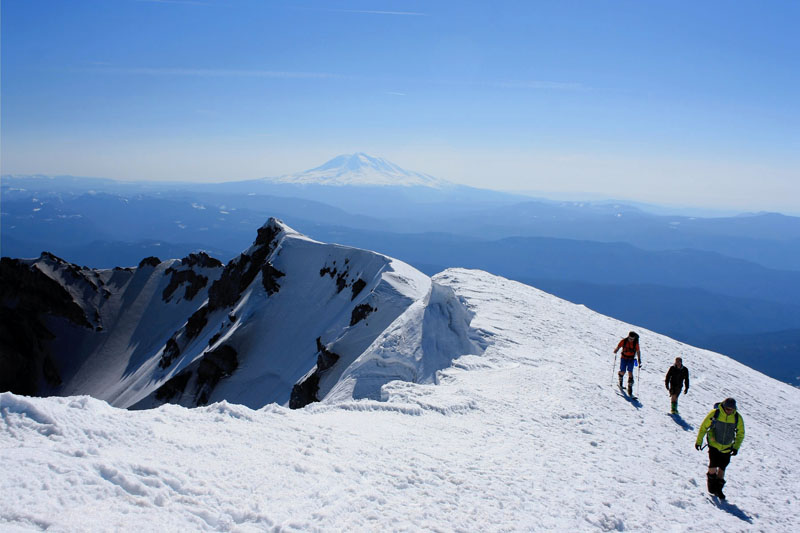 Upon reaching the summit, we posed for the obligatory summit shots and took a breather.  This became more fun because a great number of people there were sporting all manner of ladies dresses, hats, etc.  We posed for our shot and quickly re-clad.  Even though it was already in the 50’s, the mild wind was enough to keep our jackets on.  We had some lunch, took some photos, enjoyed the scenery and enjoyed the show.  We were some of the first few groups there, and a huge line of people were steadily streaming to the summit. The costumes and goof-balls that showed up were certainly entertaining. 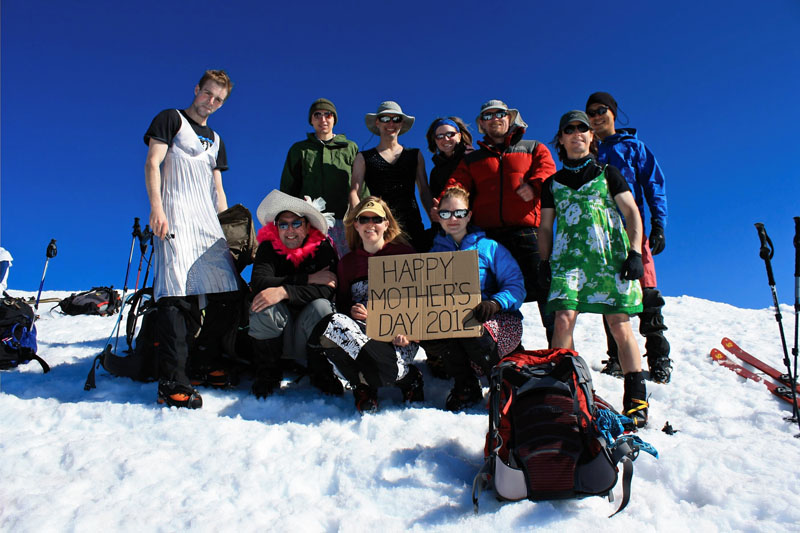 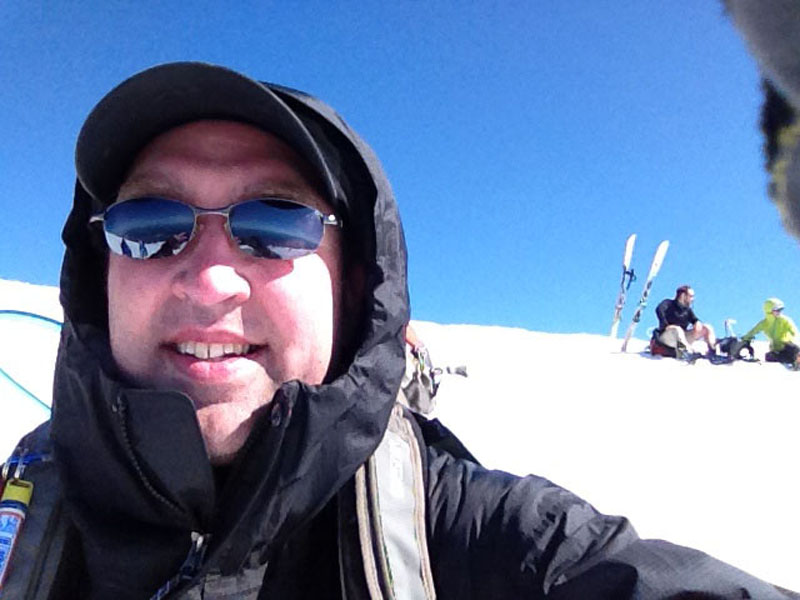 Then the best part – the return trip. About a third of the people coming up skied or snowboarded down.  We did not have such accoutrements (but man – I would have LOVED to had my snowboard judging by the amazing carving folks were doing!), so we opted for glissading.  The snow had softened dramatically by this point under the glaring sun, so we glissaded huge sections back to our campsite.  Honestly, some of the most fun I’ve had in a long time.  Absolutely amazing conditions.  I did see some slab cracks forming at the tops of some ridges – and it certainly made me pause – but our leaders believed them benign and we skirted them.  Still, I was keenly aware of those avy warnings that I’d been reading.  The advantage of the glissading was actually that we spent much less time in the ‘danger zones’ by zipping around them instead of spending extra time hiking them.  We reached camp in a blindingly fast 2 hours.  We packed up then hiked back to our cars.  We were all quite beat by the time we reached the vehicles – but it all went swimmingly.  What a great experience! 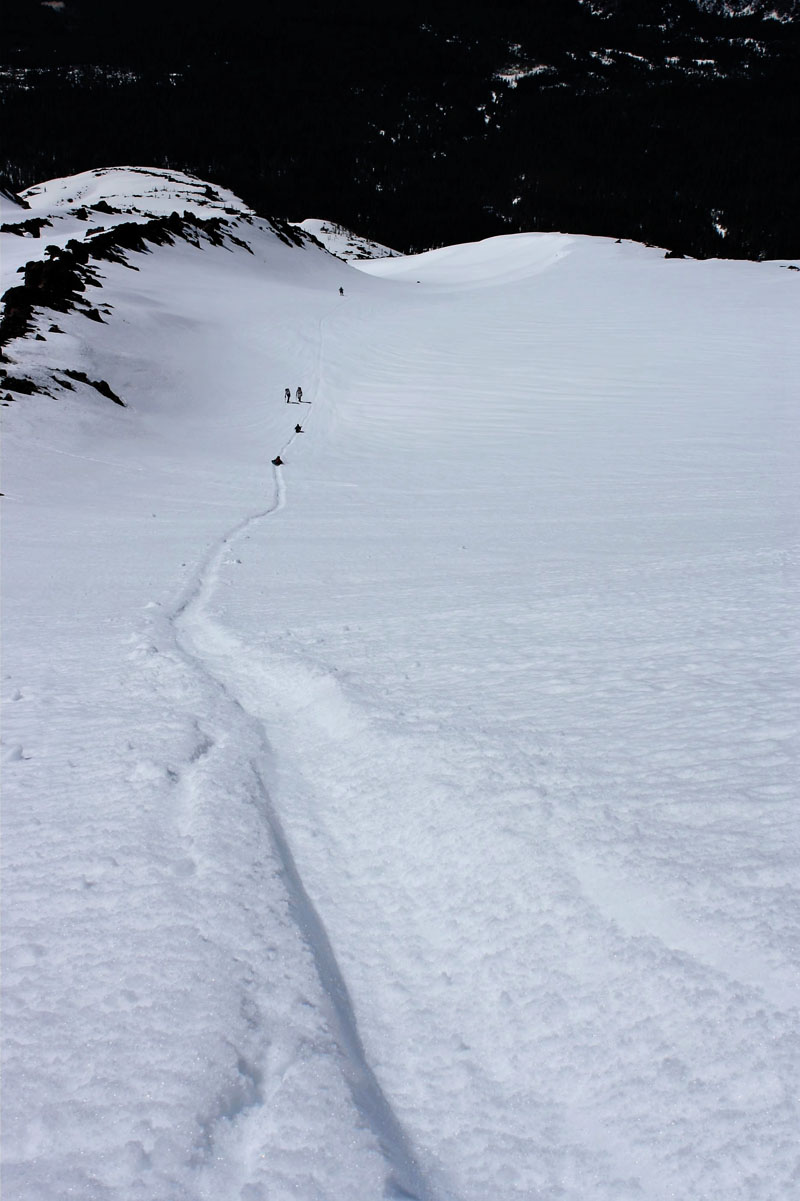 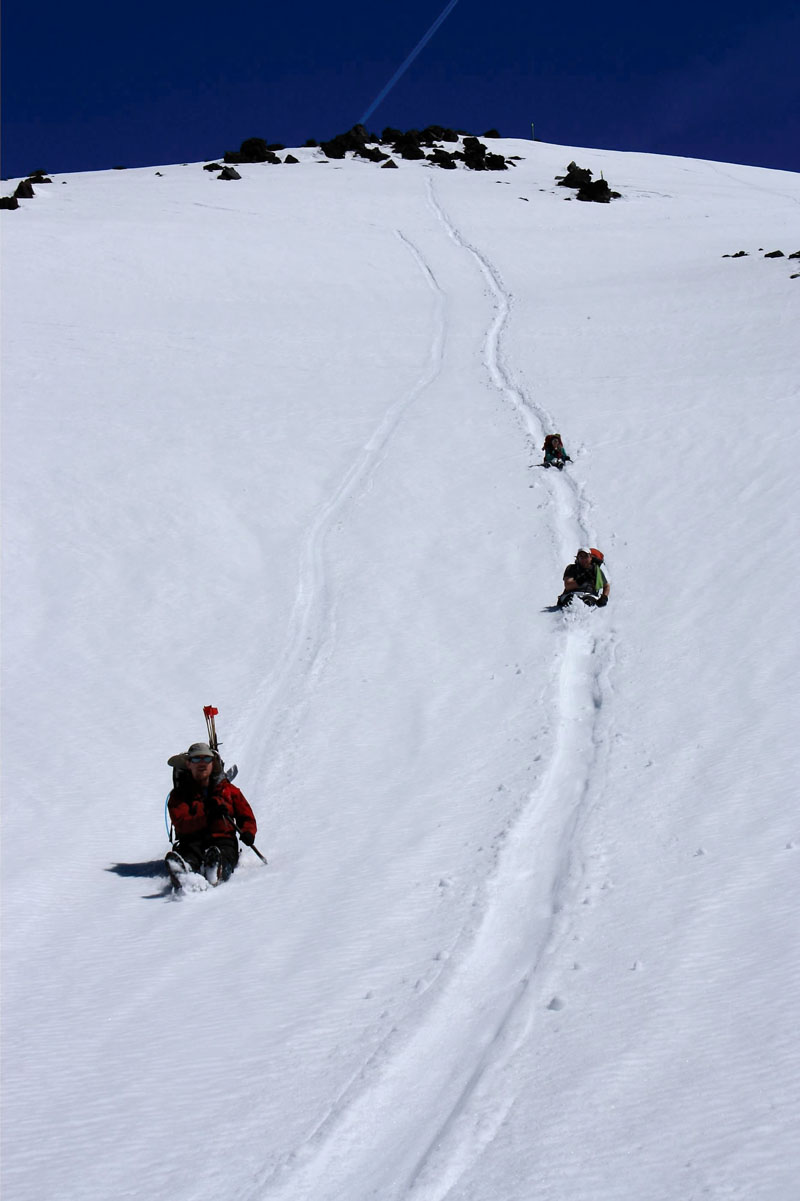 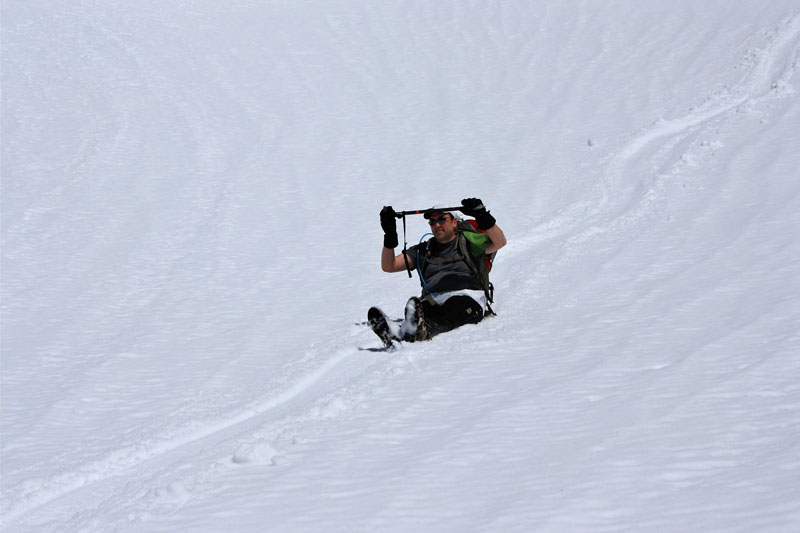 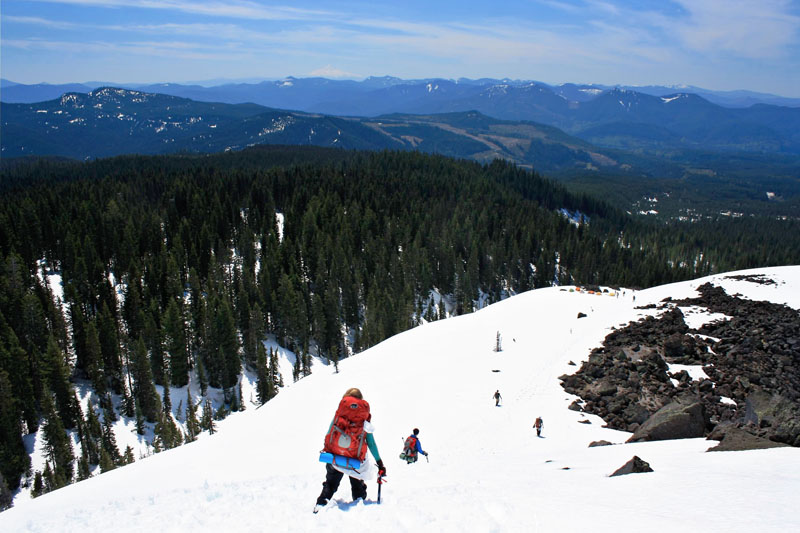 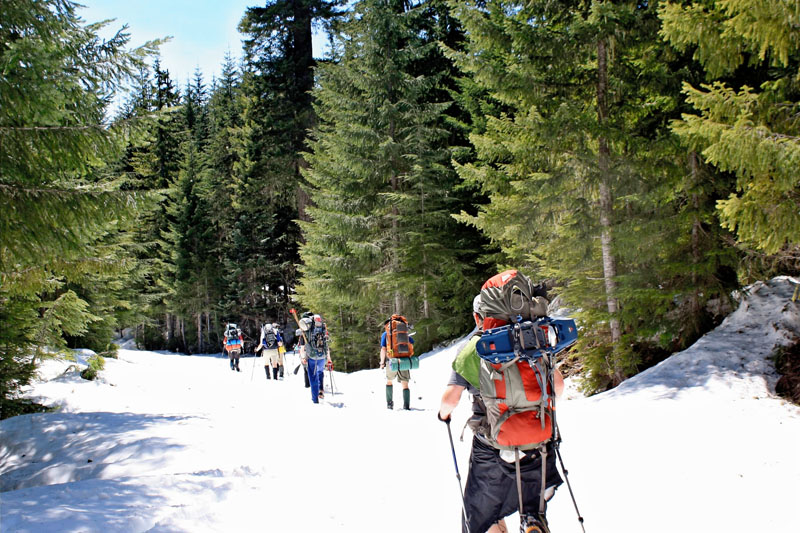 I would have wished for far less avy danger and certainly wouldn’t have attempted this without 2 very experienced team leaders.  I also escaped getting sunburned – but did get a really nice sun rash.   Even two days after the trip, the second I get into the sun my skin starts to prickle.  This after taking baths in SPF 50 every hour for two straight days.  A testament to how bright it was.  Good thing I work an inside desk job so I can give my skin a rest. 🙂