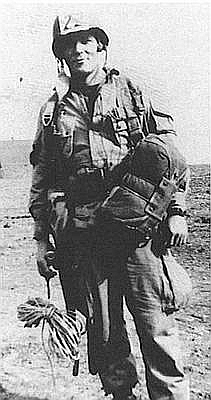 Major Richard Winters, commander of Company “E”, 2nd Battalion 101st Airborne during World War II and the character who was the basis of the Band of Brothers series, died this Jan 2nd, 2011.

I personally found the Band of Brothers series to be one of the best war-based TV series created in recent years; and Winter’s successful assault on the fortified gun positions at Bercourt Manor (that was depicted in tremendously accurate detail in Episode 2 – Day of Days) during D-Day landings launched him into near instant fame. He continued on up the ranks during the war because of his excellent tactical and personal leadership. The assault was featured as a major part of one of the Band of Brothers episodes which had a nearly exact re-creation of the events and assault. The assault was so well executed and planned that it’s still studied in West Point as a textbook study in how to attack a fixed position. This assault even made it into mods for various FPS games and it even became an official mission in the Call of Duty series.

I was intrigued to find out what the strategy was, but could not find any details of the actual tactics.  Well, look no further. I finally found a site that shows the step-by-step account of the attack. Here is the detailed flow of the assault in very easy to follow diagrams. It appears that site is not being maintained and increasingly broken, so I’ve copied it below.

Personally, I’m continually amazed by a dichotomy of reading about combat tactics and the reality of the performing them on the ground. While these situations are studied from perfect aerial views with everything clearly marked, the reality is that everything is seen and evaluated at ground level. A great tactician has to survey covertly without being spotted, without knowing anything about hidden emplacements, without being able to see actual numbers, and usually with only partial views with key pieces blocked by obstacles. He must have an intimate and cold evaluation of his mens’ training and weapons’ capabilities.  He has to gather this information while laying in mud or thickets – sending men around only so far as they can recon without being seen.  This soup of input is then processed and a plan churned out instantly; often in the heat of battle. As the assaults progress, they must re-evaluate and keep moving very quickly using tactics of misdirection and hitting positions before they can re-adjust to the assault. As an avid player of FPS tactical games like Counter-Strike, I see how this is like poetry in motion when you get hooked up with a good team that can sense the shifting positions and anticipate counter-assaults.  They know when to rush and when to shift. I find this an amazing skill; and one I’ve always wanted to learn more about.

To see how this looks in action, I present to you the Assault on Guns at Brecourt Manor as shown in Band of Brothers Episode 2 (note: these videos sometimes break if they get copyright takedown notices – just search for the title on YouTube and you’ll find others).

Below the videos is the battle flow diagrams.

Also, there are a number of videos made about the assault on YouTube as well.

Major Winters talks about the assault:

Review on the site and flow of battle at the actual location:

Here are the charts, since the original link seems to be falling apart.

Location of Brecourt Manor in relation to Utah beach.

And here is the flow of battle:

After a night of havoc with sporadic contact with the enemy, Lt. Richard Winters, Easy Company (506 P.I.R.) managed to collect some of his men and men from other companies. He had landed on the northwest corner of Ste. Mere Eglise and steadily made his way, picking up others, to the east towards the beaches and then south. Eventually he assembled with larger numbers, and moving southward from Le Grand Chemin enemy contact was made; just south of Le Grand Chemin and north of Brecourt Manor a battery of 105 mm guns was shelling Utah Beach. Without realizing most of E Company was still making its way to the assembly point, Lt. Winters was ordered “to take his men” and knock out the placement. Knowing little more than the placement of a machine gun and one artillery piece, Winters and his force of 12 men moved south (Koskimaki, 230 – 231). On scouting the area, Winters found that there were actually four 105 mm guns connected by a trench network and defended from a distance by a collection of German MG42 nests.

Upon arrival to close proximity to the battery, Lt. Winters set up two 30-caliber machine gun positions to act as bases of fire. Pvts. Joe Liebgott and Cleveland Petty were assigned one position, while Pvts. John Plesha and Walter Hendrix manned the second. Sgts. Mike Ranney and Carwood Lipton were sent northwesterly (past the old truck and rubbish pile) to establish covering fire as well. Lipton, with limited visibility, climbed a tree for a better view, but in an exposed position. Sgts. Bill Guarnere and Don Malarkey accompanied Lt Buck Compton down the tree line in a flanking position of the German MG42 nest.

Pvts. Joe Liebgott and Cleveland Petty were given the order to commence firing. Lipton and Ranney also began harrassing fire from the tree position. Meanwhile Compton, Malarkey and Guarnere were in position to attack from the German machine gun’s right flank…

…from the gun’s right flank they threw grenades and began charging in thus knocking out the MG42. Lt. Carwood Lipton later recalled, “And then, just like in the movies, I saw Compton and Guarnere running in and throwing grenades with almost every step.” (Koskimaki, pg. 230)

Winters, along with his group (1) then charged along the tree line then out through the field to the trench system. The Germans in gun position one were overwhelmed…

…and abandoned the first gun position. What German infantry was left retreated south in the trench system towards the next gun and south across the field towards Brecourt Manor only to be fired on in the open. Contrary to the HBO series depicting Lorraine has having trouble hitting a retreating German, it was Bill Guarnere who actually missed his man. “Guanere missed the … Jerry, but Winters put a bullet in his back. Guarnere followed that up by pumping the wounded man full of lead with his tommy gun.” (Ambrose, 98)

The assault team now began to take fire from a line of MG42 nests located in the hedges to the west and southwest. Additionally the Germans in the next gun position began to fire and throw grenades. It was here in the north end of the trenches, as gun one was taken and about to be destroyed, that Popeye Wynn was injured by grenade, and Joe Toye had two close calls.

With the first gun under control, the attack on the second gun was put into place, but Winters, sensing a counterattack, checked the trench system. “I flopped down and by lying prone I could look through the connecting trench to the next position, and sure enough there were two of them setting up a machine gun, getting ready to fire. I got the first shot in however, and hit the gunner in the hip. The second…in the shoulder.” (Koskimaki, pg 232)

The MG42 fire from the west across the field was almost non- stop at this point, so all activity was limited to a crouch in the trench system. Lipton made his way up to the first gun only to discover that he had left his musette bag with explosives behind. He left, as ordered, to retrieve his bag.

Winters now ordered the assault on the second gun. Leaving three men on the first 105, Winters led five others in a charge on the gun. With only one casualty the gun was taken (Ambrose 100). It was at the second 105 position that Winters discovered the radio and map room. This was an important find, as the maps contains locations of every German battery on the Contentin Peninsula. Winters ordered the radios and remaining materials destroyed.

With two guns under their control, Winters ordered the four machine gunners forward to suppress the MG42 fire from across the field. The team was joined by Pvt. John D. Hall of A Company. Hall led the charge on the third gun but was killed. However, the gun was taken (Ambrose, pg. 100). Captain Hester, S3, then joined the team, bringing with him incendiary grenades. Winters ordered all the captured guns destroyed.

Five more men, led by Lt. Ronald Spiers of D Company, arrived to reinforce the effort. Speirs led the assault on the fourth and final gun. The gun was taken but not without the loss of one man, “Rusty” Houch of F Company (Ambrose 101). All guns were now capture and effectively put out of operating order.

With all guns captured and destroyed, Winters ordered a fallback to the original starting point and subsequent retreat to Le Grand Chemin.

This site uses Akismet to reduce spam. Learn how your comment data is processed.